Keeping the fun alive, it is time to roll with the Ds in our series of fashion vocabulary!

Definition: A style of woollen coat which is made from double weave duffle fabric, lined with tartan pattern, a buttonable neck strap, three or four toggle closure on the front with large patch pockets. Originally worn by the British navy during the World War II, this style is now seen in Parkas and high-end coats using the Melton cloth.

Trivia: In 1995, all the members of the rock music group Oasis wore duffle coats for the cover of their single “Roll with it”. Definition: Also known as the Ruby Slippers, this pair of magic shoes were worn by Dorothy Gale, played by Judy Garland in the movie The Wizard of Oz in 1939, is perhaps one of the most iconic and well-known shoes in the history. Designed by Gilbert Adrian, this pair of shoes had almost 2300 sequins and seven designs were replicated after the popularity of the shoes.

Trivia: One of the original two designs, the “Arabian shoe” was last owned by actress Debbie Reynolds and were sold for $510,000 at an auction in June 2011.

Definition: In fashion, double-breasted refers to a coat or jacket with wide, overlapping front flaps and two parallel columns of buttons or snaps. A common style for high-end pea coats and trench coats, it features a wider peak lapel and six to eight button closures.

Trivia: The lower buttons of the double-breasted blazers are known as Kents, after the Duke of Kent who made this style very popular. Definition: A silhouette of a skirt which sits tight at the waist with gathers and falls below the knees. Inspired by the Drindl, the traditional costume of Alps peasants, this skirt shape has since trickled down the runway to the streets and lends a feminine-chic appeal. Trivia: The traditional dirndl has a knot at the waist which is an indicator of a girl’s marital status. Knot on the left side indicates that she is single and available, the right knot means she is married or taken, the centrally placed knot is an indicator of her virginity while a knot at the back represents her widowed status. Look closely next time! 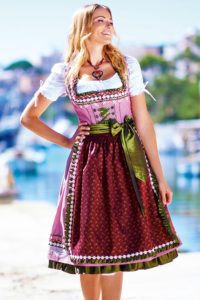 Definition: A sleeve style wherein the length of the sleeve edge is very low sometimes as low as the waistline which tapers towards the wrist. Commonly found in tops and dresses.

Celebrity Sighting: Model of the moment Kendall Jenner was clicked wearing a Dolman Sleeve Overcoat from Cut25 by Yigal Azrouel. A style that looks like it has survived an accident or have gotten mauled by a wild animal, distressing trend has taken over the streets. A sheer example of trickle-down fashion theory, which means this style has been borrowed from the poor and homeless. Cough, *Yeezy Season 3*, cough! Be it jeans to T-shirts, sweatshirts to even caps, the style is omnipresent. Have you gotten your hands on one of these? Be creative and get your scissors and knives out and go rip one of your old jeans here!

Psst, did you have a look at the A, B, Cs in this series? Keep watching this space for more and share some love in the comment section! XO.

How to wear these 5 most difficult to style fashion trends? What’s all the buzz about the utility trend?