Welcome back to the People Academy of Fashion Vocabulary! Let’s kickstart this session with more trending and stylish terms! Everybody say B!

Trivia: On October 2009, UNESCO designated Indonesian batik as a Masterpiece of Oral and Intangible Heritage of Humanity.

Birkin Bag
Definition: A tote bag from the house of Hermes, named after Hollywood actress and singer Jane Birkin. Designer Jean-Louis Dumas designed an all-purpose handbag exclusively for Birkin after she complained to him about the lack of a fine leather weekend bag for ladies. The bag comes in a variety of leather ranging from crocodile to lizards, ostrich to calves. Trivia: Birkin bag is a symbol of wealth due to its high price ($11,550 to $150,000) and celebrity use. The bag is highly coveted and, for several years, was reputed to have a waiting list of up to six years. Ballerinas
Definition: A flat shoe fashioned after the ballet shoes with minimal to no heel, round toe-box and sleek vamp. Decorative trims like a bow or embellishments are added for a contemporary flair. Trivia: In 1957, this style of shoe became immensely popular after Audrey Hepburn wore them with skinny jeans in the movie Funny Face. Originally a flight jacket, this style was huge on the runways at the recently concluded Autumn/Winter Fashion Week. Big labels like Yeezy by Kanye West, Louis Vuitton and MSGM had variations of the bomber jacket which were positively received by the fashion critics. There’s no better season than now, to invest in one of these and look like a bomb! 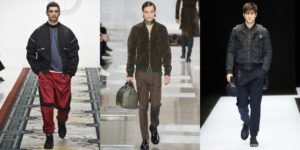 Come back next week to quench your fashion thirst some more! Toodles!

Previous Article Fashion 101: What the F? 7 COMMANDMENTS TO SHOP DURING THE SALE TIME