The 60th Grammy Awards may not have held the Globes ‘dramas in black, but nonetheless it held its own – with Hillary Clinton raising controversies another notch by reading something that was controversial already. On the night that featured the biggest stars in music, it was Ms. Clinton who received the loudest ovation when she read out excerpts from “Fire and Fury by Michael Wolff.

That aside, we spotted quite a few celebrities wearing white roses on the red carpet, to show their united support towards the #TimesUp movement.

Men made their appearance in various textured, patterned and coloured suits with white rose lapel pins that highlighted their ensembles. Women wore stand-out dresses and suits with the aforementioned white roses pinned as a statement. Musician Ava Max however nailed the most innovative ensemble by painting a white rose on her chest!

Missed the Grammys 2018 live telecast? Don’t you worry… Here’s a sum up of the spectacular Sunday night that featured some of the best performances by various artists! Grammys night was big for Bruno Mars. Besides taking home six major awards, Bruno sported a shimmery jacket that shone him through the event! He bagged the three biggest honours of the night – Best Album of the year, Record of the year and Song of the year. The next big win was for Kendrick Lamar, who took stage in a stylized suit. He won five awards at the 60th Grammys, for the Best rap song, Best rap performance, and Best music video. He was also honoured for the Best Rap Performance with Rihanna and DAMN picked up Best Rap Album during the main ceremony.

Cara’s big win at the Grammys for “Best New Artist” ended in total chaos, when viewers started tweeting about her not being a new artist. The star writing back to the tweets on social media only added fuel to the flaming fire against her. If that wasn’t enough, Cara was the only woman to win a 2018 Grammy in a top category. Whatever happened to diversity and equality? That’s one question on everyone’s lips and Grammy’s haven’t come up with a half decent answer, yet. Fans are really not happy about Ed Sheeran’s “shape of you” win over Kesha’s “praying”, a song that’s about her victory over social assault. It would have been the perfect close to an event that’s taken #timesupnow campaign to the next level. The fact that the artist himself was not present to receive the award, did not help matters much, either.

THE BEST OF GRAMMYS PERFORMANCES! Kendrick Lamar started his performance on a high-note with his army of soldiers marching in front of an American Flag. He went to blow our minds with an electric rap performance. Lady Gaga looked larger-than-life (literally!) in those angel wings beautifully draped over the piano, as she performed “Million Reasons”. She dedicated the act to her father’s late sister, Joanne for her love and compassion. We loved it!

Fonsi’s and Yankee’s live performance of “Despacito” brought the crowd on their feet, dancing to this super track. The live performance put any question as to why it was named the most heard and loved song of the year, to rest. Childish Gambino’s performance of “Terrified” was crowd-pleasing with his impeccable vocal performance that hit all the right notes!  He had young JD McCarry performing alongside, climaxing it to the end note with some extra-ordinary feels! Bruno Mars’s “Finesse” with Cardi B was one of the winning performances of the night. The stage was literally dipped in shades of colours along with fun-filled visuals that took us all back in time. 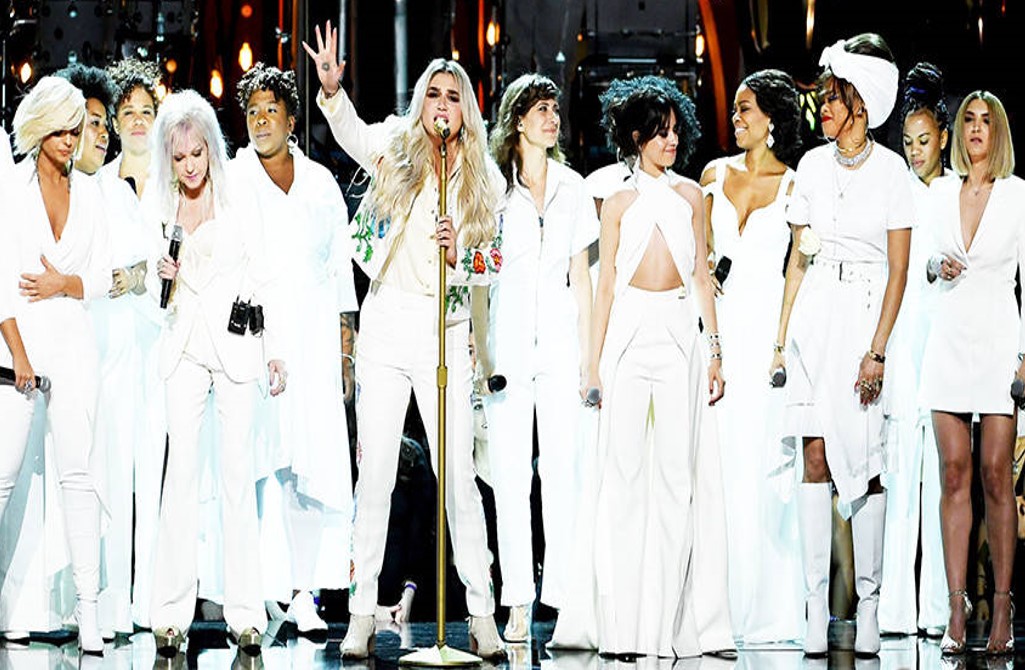 Kesha put her soul out there while “praying” in her white suit with highlighted floral embroidery. She was accompanied by a choir that wore white – all in all, it all came across as a powerful statement for #MeToo.

The Grammys were packed with powerful stage performances and well… a few controversies that will have to wait for the next news cycle. Till then, stay tuned for more interesting fashion news and trends!